VINTAGE G I JOE SALESMAN SAMPLE ACTION PILOT AIR FORCE DRESS WINDOW BOX INSERT
The full description is at the bottom of the page after all of the photos.

A QUICK EXPLANATION ABOUT THE TERM SALESMAN SAMPLE.
A lot of people have misused the term salesman sample over the years. When I use the term, I mean this piece was originally used or intended to be used by a Hasbro Salesman, or an independent salesman representing Hasbro's products. This salesman was given the samples of the products coming to the market to take out and show toy buyers at toy or department stores so they could envision what the item would look like. Many of these salesman samples have shown up over the years but for the most part there has only been either one or two of any particular item ever found. I honestly believe that the items I have chased, the salesman sample small accessory cards and window boxes, there have probably been less than 3 dozen total found in the whole world, EVER! I have actually seen less than 20 of these pieces change hands over the 15 years of looking for them including all of the items I have in my collection.

Most of the known sample cards in are the hands of less than a half dozen collectors, including myself. They are the true definition of RARE. 3 or 4 pieces have shown up on eBay over the years and a few pieces showed up in the big Don Levine auction around 1999. I have actually helped identify 2 small batches of these salesman sample packages when they were unearthed. Both batches were found around the Pawtucket, RI area. One big find was literally found at the Salvation Army, a few miles away from the original Hasbro factory. Regardless of where they come from, they are truly unusual pieces and have very distinctive markings that only a few people in the world can identify. I am photographing and posting these items on my website to sell for the first time. I have owned many of these pieces for a long time and have always been reluctant to post photos of them for fear of people trying to duplicate them and fake out other unsuspecting collectors.

PLEASE note that after I have posted these items that most people will think I have faked them and that I am totally full of crap. Believe what you will but I do know a few honest collectors who have seen my whole collection in person and can verify my claims and where many of the items have come from. This first issue type of stuff has ALWAYS been my specialty in the vintage GIJoe hobby. Please also note that this stuff will never show up for sale again unless someone buys it from me and then tries to resell it. 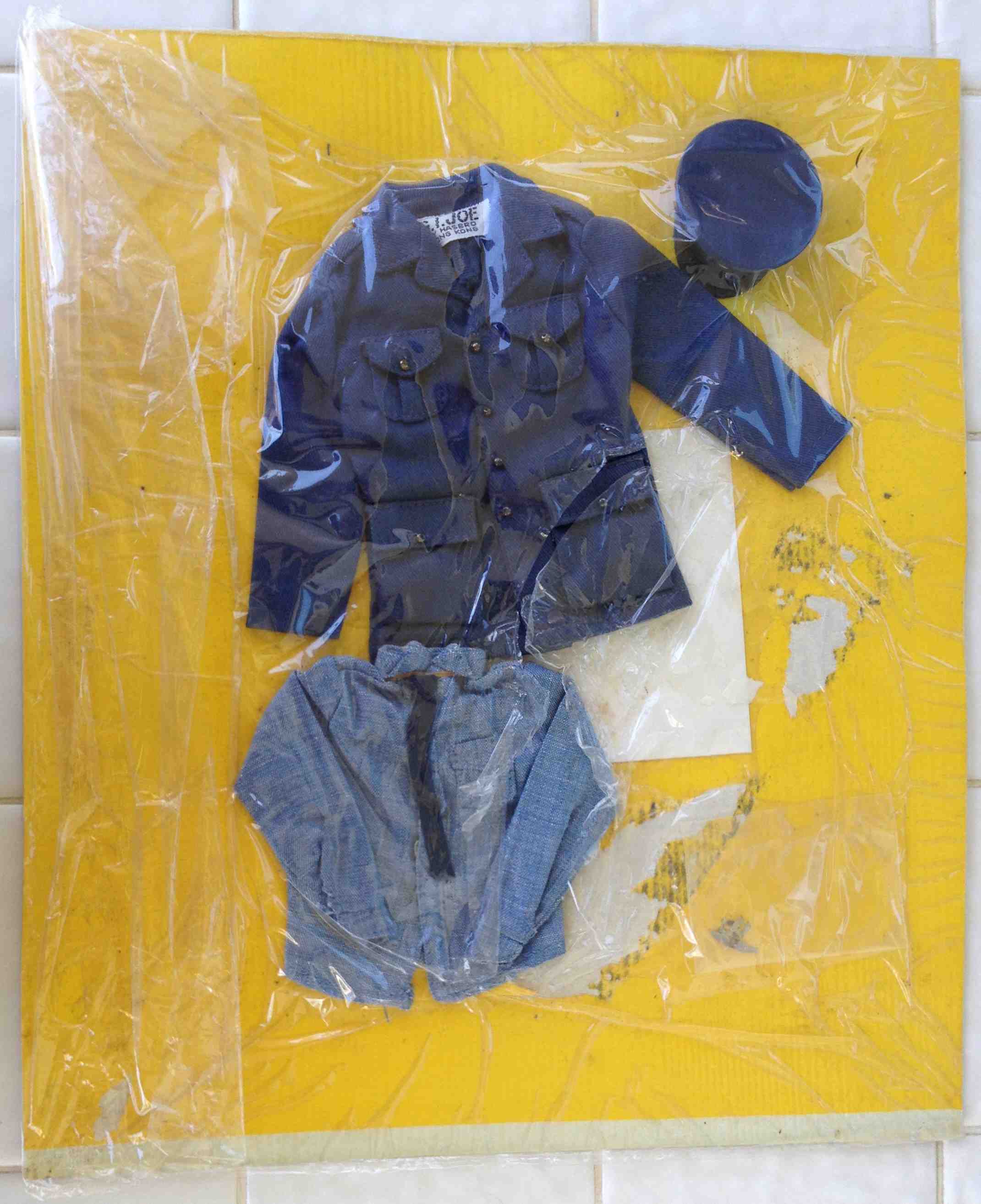 ITEM #154 - VINTAGE GIJOE ACTION PILOT SEALED SALESMAN SAMPLE AIR FORCE DRESS WINDOW BOX INSERT
It is a subtle difference at first glance but this is definitely a salesman sample insert card. It is not perfect by any means but it is indeed genuine. 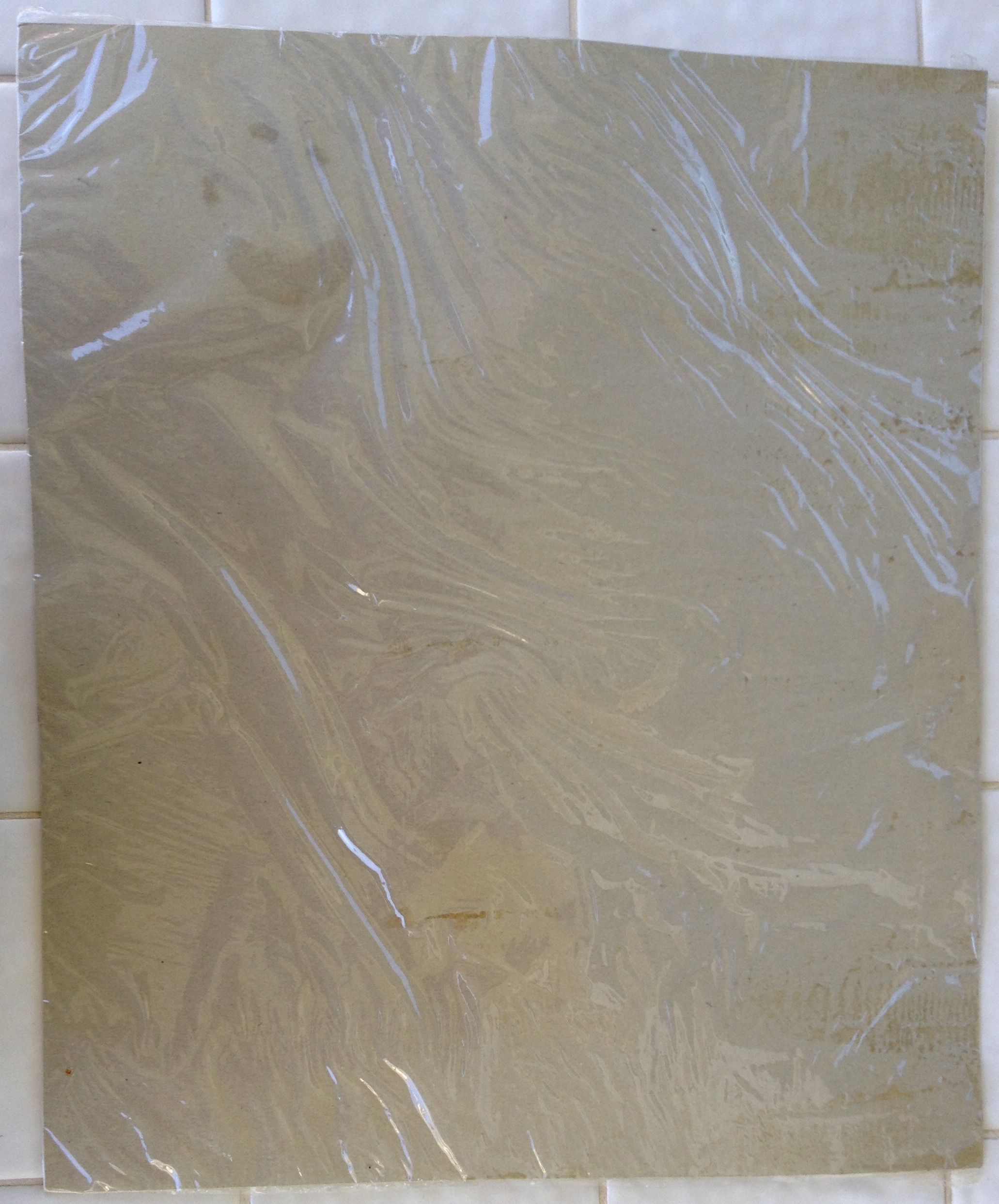 Here is a photo of the back of the insert card. You can see that nothing is sewn onto the card and that the cello is intact over the whole back. 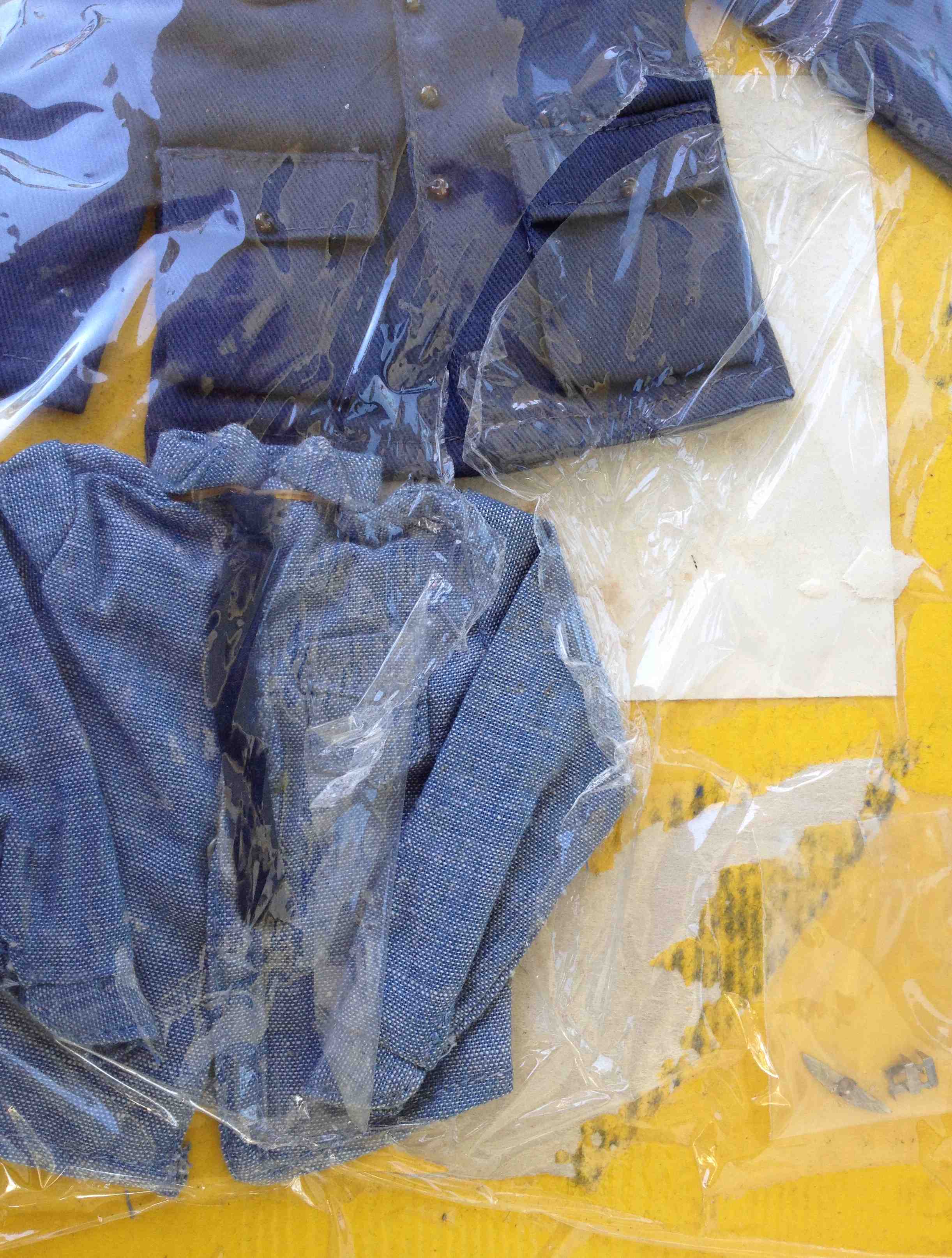 Here is a close up of the damaged cello so you can see what is wrong here. I believe someone at Hasbro actually opened this after they finished a photo shoot. I think they took the pants and the air manual out and used them on another salesman sample card. This package was found, near the original Hasbro factory along with a few of my other salesman sample packages. Notice how dark blue that material is on the shirt, much like a first issue two pocket sailor shirt. Also note that the rubber band is still intact on the tie under the collar.

HERE IS A PHOTO OF AN OLD SALESMAN SAMPLE CARD, FOR REFERENCE, THIS ONE IS NOT INCLUDED IN THE SALE
Back in the late 1990's a big collector had (and sold) a salesman sample Air Force Dress Pants card and it had an air manual on the back. It is entirely possible that the missing pants and air manual out of my package was actually used for that salesman sample package. It is impossible to tell for sure but because so few of these salesman sample packages have surfaced over the years that it does not take too much imagination to think I might be correct. 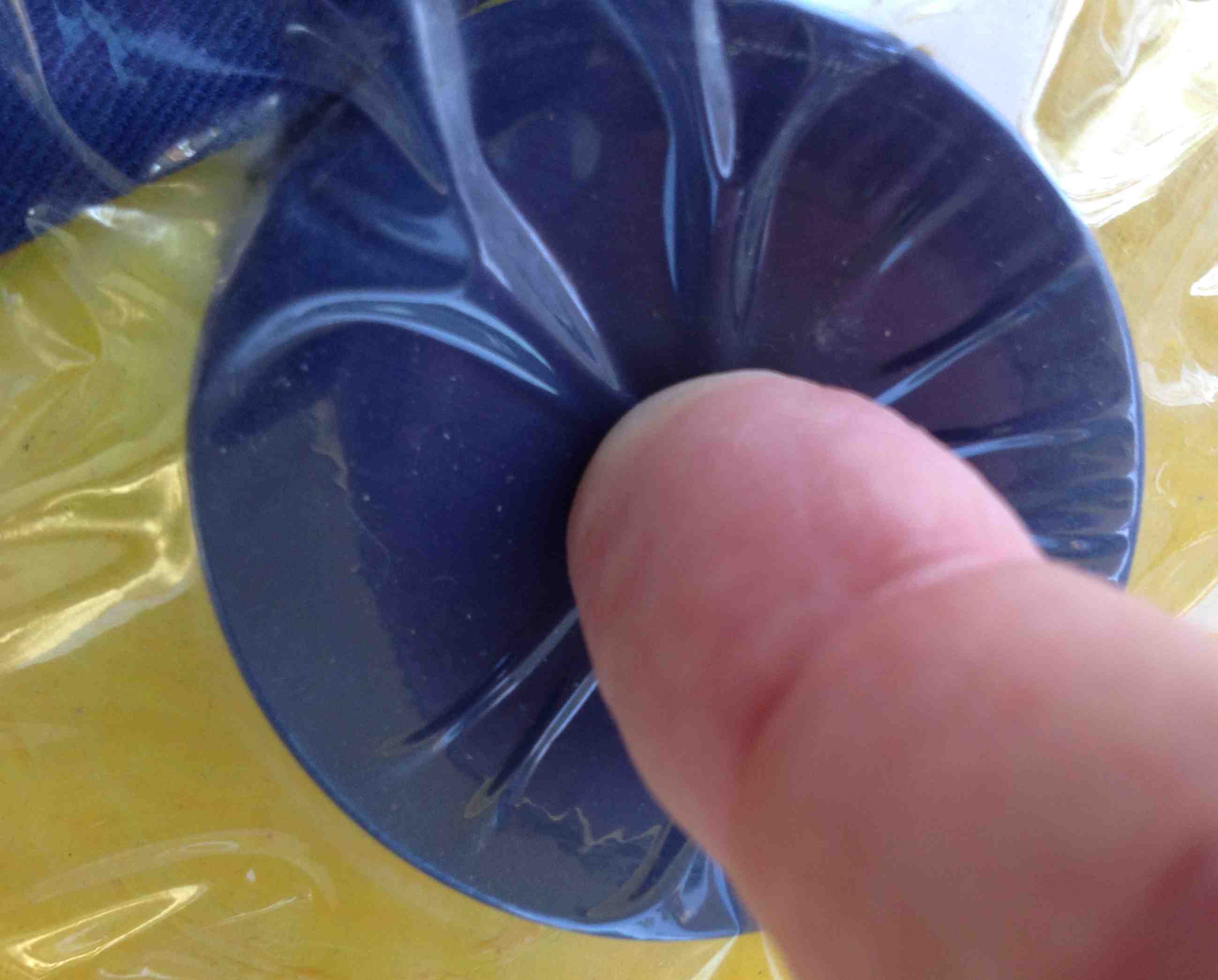 HERE IS A CLOSE UP OF THE AF DRESS CAP UNDER THE CELLO
This photo shows that this is definitely as nice a cap as you could imagine because it is super soft and full size; just like the original makers had intended. Most Air Force Dress uniform caps are hard and shrunken down. This one is perfect! 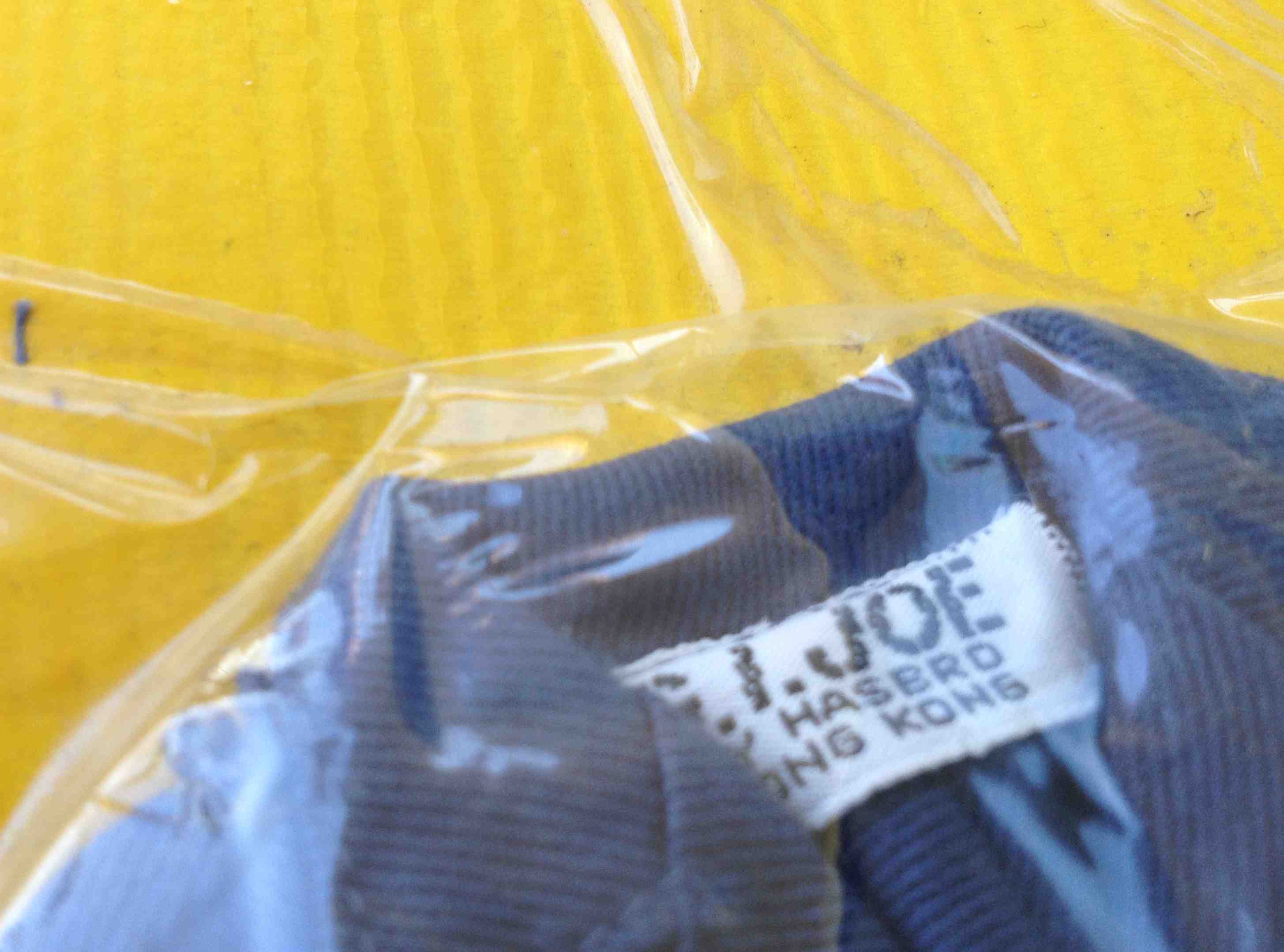 HERE IS A CLOSE UP OF THE WORDING ON THE TAG OF THE JACKET
You can see that the plastic film is sucked and melted completely down onto the backing card, right around the uniform pieces. There would be no way to fake something like this as the method Hasbro used to make this backing card was so crude. It did the job but today's laminators and coaters that printers use would have made a much smoother plastic coating on the backing card. 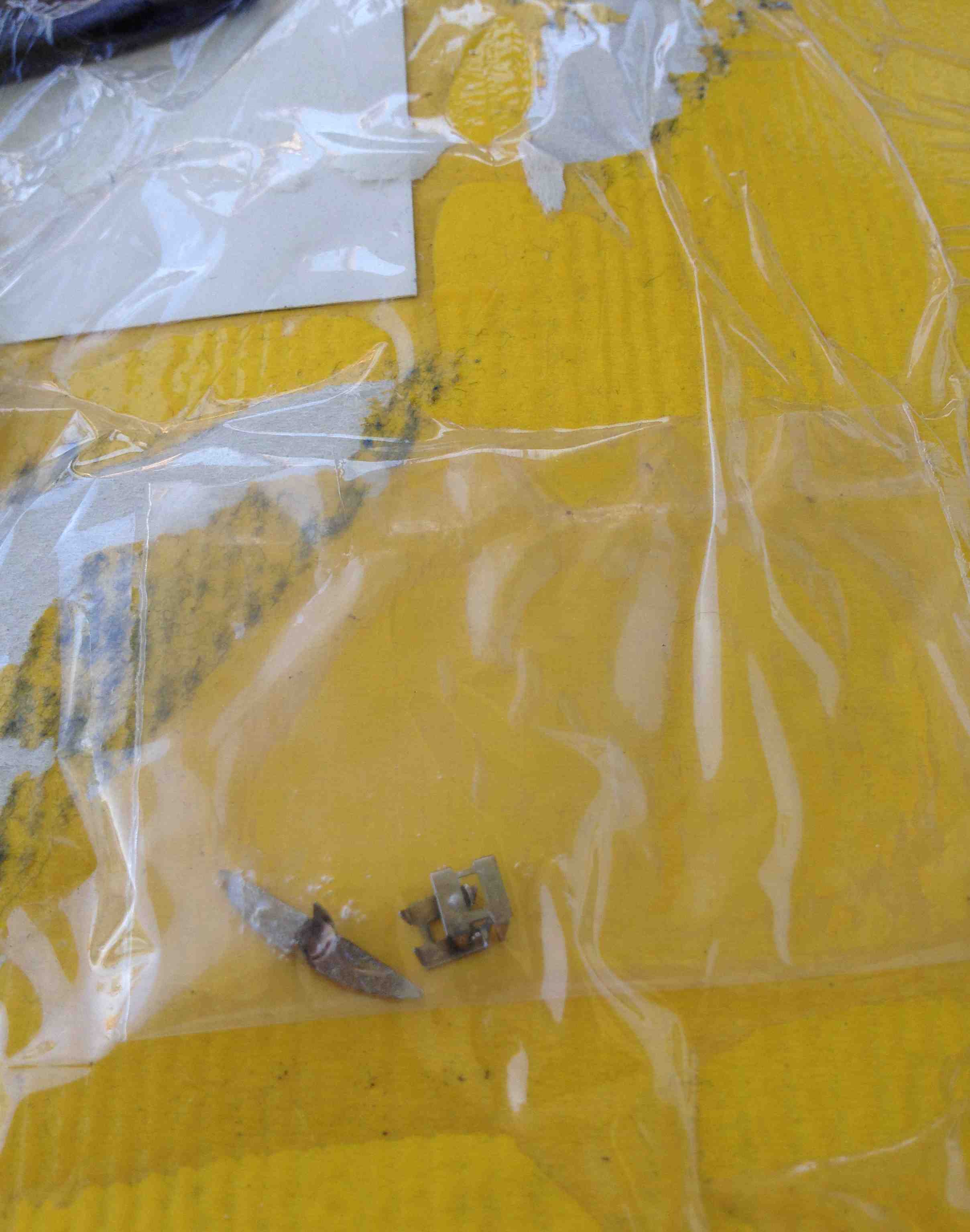 HERE IS A CLOSE UP OF THE BAG INSIDE OF THE SET WITH THE BARS AND WINGS
I've never touched this stuff, it came just this way with the little tabs bent perfectly at right angles, ready to use.